The Minnesota Twins have been eliminated from the Postseason. Twins fans are getting used to hearing that. The last time they didn’t have to was 1991. That year, they brought the Commissioner’s Trophy to the Twin Cities for just the second time ever. Of course, maybe all of that wouldn’t be so painful if they had a single Postseason win to cling to. But there’s not been such an occurrence since 2004.

After winning game one of the 2004 American League Division Series against the New York Yankees, the Twins dropped the following three to lose the series. The rest is history. The Twins have since lost 15 consecutive Postseason games for a total of 18 straight October losses. The Yankees have won 13 of those games.

Miami Marlins fans would argue that no admission to October is worse. Which, until this year, is what they’d experienced. Of course, that’s coming from a fanbase that won a World Series just before the onset of the Twins’ losing streak. No matter how you frame it, there’s no question the Twins’ feat is far more frustrating than any other. Being so close to glory – yet so far away.

It would be futile to try and diagnose the Twins’ troubles. Instead, let’s accept it and take a look at the historic streak the Houston Astros helped extend on Wednesday. Here are some oddities, facts and feats:

Since their 2004 ALDS loss to the Yankees the Twins have deployed 43 hitters and 38 pitchers (plus 42 players who did not take an at-bat) in their effort to win a Postseason game. Joe Mauer leads batters in at-bats (40) and Carl Pavano leads pitchers in innings pitched (13). They played in four and two Octobers, respectively.

Pavano made just two starts (pitching against the Yankees in both 2009 and 2010) and collected -0.28 win probability added – that’s 30th among the 38 pitchers who participated in the Twins six losing Postseasons. Pavano is among Jose Berrios and Brian Duensing as the only arms to start multiple October games for the Twins since 2006. Duensing has made one of the worst contributions, posting a -0.4 WPA, second-worst among our pool of playoff pitchers (or worst among those with more than a single inning pitched). Berrios is slightly better off, though he’s still made a negative contribution, a -0.16 WPA. Naturally, no pitcher has two starts in a single Postseason.

Joe Mauer has been similarly unimpressive. His win probability added is -0.22 or 10th worst of 43 batters. That’s after he led two of his four playoff teams in regular-season bWAR, placing second in 2006 and fourth in 2017. There are very few hitters who have been productive for the playoffs Twins teams at all. There have only been eight position players to offer positive value in Postseason games for the Twins since 2006. This contrasts to the 35 players who contributed with a WPA of 0 or worse. 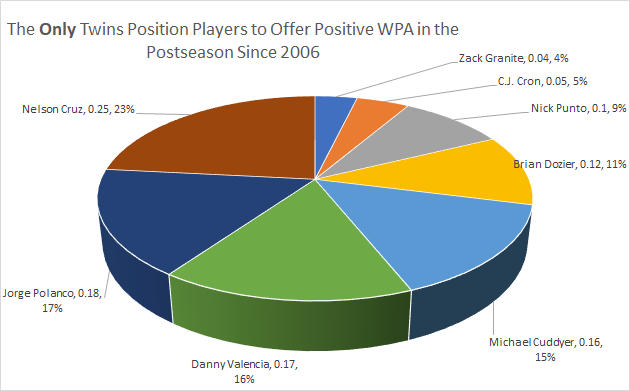 It’s difficult to focus on the positive when the topic of discussion is an 18 game losing streak. But if there’s been one star it’s Nelson Cruz. He’s seen five losses and 16 at-bats over two seasons. Yet still, Cruz has offered more win probability than any other position player, accounting for nearly a quarter of all productive WPA by position players. Of course, Nelson Cruz is 40 years old. 8 years older than the next youngest on that list or 12 years older than their average age (during their most recent postseason play).

On the mound, it shouldn’t surprise anyone that first year Twin Kenta Maeda has already left his mark. He’s surpassed all prior pitchers and posted a WPA of 0.3 with his single game-one start of this season’s ALDS versus Houston.

It would be an understatement to say that the Twins haven’t carried their regular success into the postseason. But the reality of the situation is far more obscure than that. Through the lens of run differential, the better the Twins have played in the regular season, the worse they’ve fared in the Postseason. It’s no flimsy trendline either – a correlation coefficient of 0.8534! Unsurprisingly, this trend is linear. But for the trend to become negative and retain its linearity is unbelievable. Though there’s likely little causation here, this is a perfect example of the type of mind-bending events and realities that continue to burden Minnesota.

While much of Minnesota’s historic streak can be attributed to unfortunate luck, there are a few key plays that may have cost them a win. Just last week in the top of the ninth inning of a tied game-one Jorge Polanco’s throwing error allowed three runs to score, those three runs would represent over 40% of all the runs Minnesota would surrender in the series.

That was the second series featuring a significant number of unearned runs. The first was in 2006 when 5 of New York’s 16 runs scored were unearned. In total, across all six series, Minnesota scored 6% of their runs on errors. 16% of their opponents’ runs were unearned. Again, it’s unfortunately timed events like these that make this Twins streak so bewildering.

It’s anyone’s best guess when we’ll see the Minnesota Twins advance in beyond the first round, or even win a game. They have a strong core of talent to build around. They have been dynamite in the regular season. And hopefully, we won’t have to wait much longer for them to show up in October.

All data sourced from baseball-reference.com.

Find all our 2020 MLB Playoff Coverage Here!
As we cover each series as the Playoffs unfold with an Analyst assigned to each series!