I suspect even the most die-hard Red Sox fans are a little surprised by Boston’s league-leading 25 and 16 record in the middle of May – even if they wouldn’t admit it. Perhaps more surprising is how successful their pitching staff has been. Boston hasn’t merely slugged their way to the top of the American League East.

They may not be fielding an elite staff, but the production the Red Sox have received from their pitchers is a pleasant surprise. Among those arms is Nick Pivetta. 12 months ago any baseball fan would be surprised to hear Pivetta was a critical component of the best team in baseball’s rotation. And yet here we are.

When Boston acquired Nick in August of last year, they stashed him at their alternate training site for a month before recalling him to make a pair of starts in September. Pitching five innings, allowing four hits in each, Pivetta struck out 13 across both starts. Eight starts into 2021, Pivetta has picked up right where he left off.

Averaging 5 and a third innings per start, he’s struck out 8.86 and walked 4.64 per nine innings. His strikeout rate is right in line with the rest of his career despite his walk rate sitting a little higher. Achieving weak and unproductive contact is what has allowed Pivetta to shine this year. Overcoming a chronically high BABIP, Pivetta is now allowing hits on just 24% of balls in play to amass an elite .188 opponent’s average. Even with his higher-than-normal walk rate, Pivetta has lowered his WHIP to a shiny 1.17.

The minuscule BABIP is one reason to believe Pivetta may be biding his time until he regresses to something more familiar. But that may not be the case, considering how Pivetta got to this point.

It’s difficult to understand exactly what’s behind such a dramatic shift in results for Nick. Especially given how similar, under the hood, this year has been to his profile, historically. Beyond the aforementioned strikeout and walk rates, and some increased slider usage, Pivetta’s arsenal looks rather unchanged.

His velocity, spin rate and efficiency are also comparable to the rest of his career and there’s nothing much new in the way of his pitches’ movement. But his improved success with the fastball, in particular, suggests that there are changes beyond pitch attributes and sequencing.

What seems to be playing a significant role in Pivetta’s success is his fastball usage. In Philadelphia, Pivetta was encouraged to pitch at the top of the strikezone, maximizing his fastball. Pigeonholing Nick was a big part of what suppressed his performance. Arriving in Boston, Pivetta was given much more leeway with how he used his fastball.

Here, it’s important to acknowledge that the Phillies weren’t exactly wrong. High fastballs have been productive for Pivetta not just this year, but throughout his career. Especially because the Phillies were well-intentioned, it’s worth taking a look at how Nick struggled in Philadelphia, why he’s excelling in Boston and why the Red Sox deserve some credit. 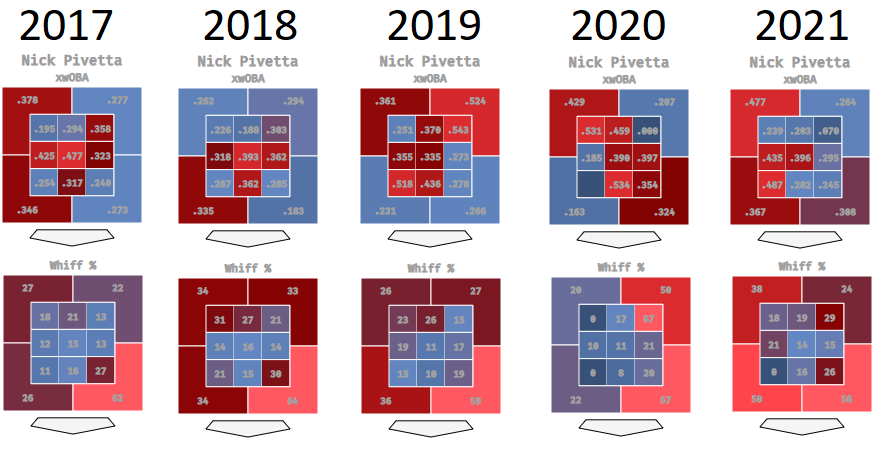 First, Pivetta is throwing more fastballs up in the zone in 2021 with Boston than he had with Philadelphia. While it seems counterintuitive, Boston didn’t tell him not to pitch up in the zone. Instead, they equipped him with the information necessary to optimize the approach he wanted to take.

And rather than isolating his fastballs at the top of the zone, Pivetta wanted to distribute the pitch throughout the strikezone. And so far, he’s done exactly that. Pivetta’s 2021 four-seam fastball has the greatest range of vertical locations of his career.

There are two clusters of fastballs in the 2021 heatmap. While one is reminiscent of previous years, and the higher fastballs that sit on the edge of the strikezone are the pitches that are gathering weak contact and strikeouts for Pivetta. Pivetta has harnessed the potential of his high fastball and diversified it by not only increasing the range of its usage but also by placing it on the border of the strike zone.

It’s not fair to assume that Pivetta simply improved his command this season. More likely, being able to pitch lower in the strike zone more frequently and freely has allowed him to keep hitters unbalanced as well as get ahead in the count more reliably (even if he’s not throwing more first-pitch strikes). Hitters can no longer rely on Pivetta tossing his fastball in a single location and dancing around the edge of the strike zone further complicates their decisions.

The impact is obvious when analyzing which attack regions Pivetta is suppressing runs in. Pivetta is actually on pace to pitch worse in the waste and chase regions. But he’s been so productive in the shadow of the zone that he’s been far more valuable so far this year. He’s currently tied for 10th for most runs suppressed in the shadow of the zone among pitchers who’ve thrown at least 700 pitches.

Don’t celebrate the Boston Red Sox for acquiring Nick Pivetta. Celebrate the Red Sox for what they did after acquiring him. Rather than force-feeding Pivetta a synthesized, computerized approach, they informed and advised him how to execute his approach with his tools.

Still, Nick Pivetta isn’t going to contend for the American League Cy Young. To what degree he’s able to maintain this level of productivity, if at all, is uncertain. But there is genuine progress that the right-hander and the organization that took a flyer on him deserve credit for.

It might seem that the bigger takeaway here is a second birth for Pivetta or even his value to the Red Sox roster. And with due respect to those subjects, it’s not. Nick Pivetta’s success thus far represents the collaborative process that player development should be. When Boston put Nick Pivetta in the driver’s seat of his own evolution, empowering him with information rather than asking him to take a trust fall, they increased buy-in, fostered accountability and enhanced the sustainability and authenticity of his performance.

All data sourced from fangraphs.com, baseball-reference.com and baseballsavant.mlb.com.